After the decline in use of ATV in Germany, an idea of building a 3 cm beacon at DB0HDF emerged. A survey of the equipment landscape revealed some shortcomings: Currently, no commercial all-in-one 10 GHz beacon transmitter is available. Documented home-brew designs exist, but often are built from a) many individual components (tin-can style) and/or b) obsolete and unavailable parts.

The goal of this project was building a 10 GHz beacon transmitter suitable for long-term unsupervised operation from commercially available integrated circuits. To make full use of the transmit power constraints in Germany, an output power of 1-2 W was targeted. Support for contemporary digital beacon transmission modes such as PI-4 was also a requirement for the design. Remote monitoring (telemetry) and control functionality was the third critical item on the feature list for a complete design.

A simple block diagram of the beacon transmitter is shown in the figure below.

The beacon transmitter accepts an external 100 MHz reference clock provided by a GNSS-disciplined oscillator. GNSS stabilization is the de-facto standard for beacons on 10 GHz and above due to their narrow spacing and small bandwidth. It also enables receiving stations to use the beacon as a frequency reference for aligning their own equipment. 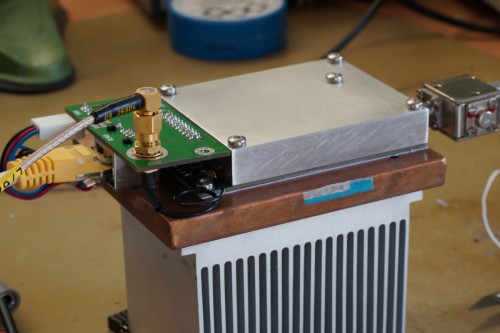 A Silicon Labs Si5342 is used as a crystal-driven reference PLL, which takes care of reference clock jitter cleaning and modulation generation. The high-resolution fractional divider allows synthesizing sub-Hz frequency steps of the output RF carrier, which are required for modern modulation formats. Due to the architecture of the synthesizer, no appreciable fractional spurs are generated in the process, yielding a very clean output spectrum with excellent phase noise. This IC generates in intermediate frequency of about 162 MHz, which is an integer multiplication factor lower than the final RF output frequency. A Linear LTC6948 RF PLL IC is used to multiply this signal by 16, up to a frequency of 2.592 GHz. From this point on, an Analog Devices HMC443 multiplier is used to create the final 10.368 GHz frequency. The multiplication creates some harmonic content at +-N*2.592 GHz away from the carrier, which are suppressed by a Mini-Circuits BFCN-Series LTCC bandpass filter. At this point, the final PA (Analog HMC952A) amplifies the signal up to around 1.5 W before reaching an SMA antenna connector.

The HMC952A also has a built-in output RF power detector, which is read out by an on-board controller with integrated ADC. This simplifies the design since no external coupler is required to monitor forward power. The MCU further takes care of reading out the various DC power sensors on the board (to monitor voltages and currents of the SMPSes) and runs the sequencing of the beacon transmitter itself. It (optionally) communicates with a remote device through RS-422 (differential signalling). 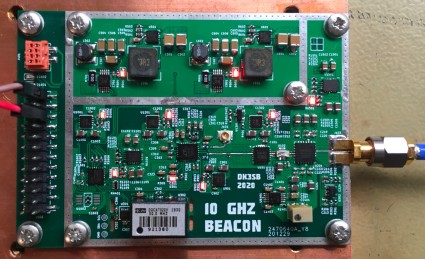 One of the key design features that helps with driving down cost is working with a commercial four-layer FR4 stackup. These have become ubiquitous and cheap to use, so one supplier (JLCPCB from China) was chosen and their PCB process characterized for RF performance. Two dedicated RF test coupons were designed: Based on the results of long simulations, prototype designs for SMA connector footprints, microstrip, coplanar waveguides etc were designed.

The very thin two outer layer pairs can be used for RF traces (outer layer for signal, layer just below as a reference plane). Their biggest advantage is their narrow layer spacing (only about 150 µm), but is also the biggest complication: Successfully designing a well-performing PCB-to-SMA transition required lots of care (and simulation time): Achieving reflection-free coupling of the whole energy into connectors with large dielectric interfaces on the PCB side was not possible in a satisfactory manner. Finally, an SMA connector with a tapered dielectric interface was chosen (Amphenol 901-10511-2) and GCPWs were chosen for RF lines on the beacon PCB. With these connectors, very good return loss was achieved in both simulation and measurements, and the PCB process showed good performance at about 0.5 dB/cm of loss at 11 GHz at better than 30 dB return loss. The characterization report of the test coupon is available here

The 4x multiplier IC (HMC443) was prototyped as a standalone device, since it was found to anyways be a useful piece of equipment for the home laboratory. This design is described over here. This prototype confirmed the harmonic performance of the multiplier, which gave confidence in the choice of LTCC filtering for the output of the beacon transmitter.

Based on these results, the key RF components could be laid out. Since all components are internally matched reasonably well, no on-PCB matching was foreseen, except for an SMD attenuator between the RF PLL and the multiplier. This mostly improves harmonic content of the multiplier output by avoiding excessive overdrive, but also helps with input matching of course.

All RF traces carrying 10 GHz were kept as short as reasonably possible, a task made easier by the exclusive use of leadless SMD components (DFN, QFN ICs, SMD capacitors/resistors/filters).

Since all components including the power supply and the 1.5 W RF amplifier are to be placed on a single, relatively compact PCB, thermal design and power distribution required some special care. A power budget including power conversion losses etc was created (available here), estimating a total thermal dissipation of about 10 W. This is obviously driven in large part by the efficiency of the amplifier, and as such the extra thermal dissipation was minimized using very-low-dropout high-current LT3033 regulators.

The design includes only SMD components, all of which are mounted on the front side of the PCB. The inner layers are preferentially used for routing (where not needed as a well-stitched ground place for RF signals) and power planes. The bottom layer is used mostly as a ground plane, to guide heat flow into a flat heat spreader below. Not having any THT components or SMDs on the back side simplifies the heat spreader design (since it does not require complex milling).

A solid (10 mm thick) copper block was attached to the PCB via a „gap pad“ for optimal heat transfer. This heat spreader was kindly milled, drilled and tapped by David F1URI. 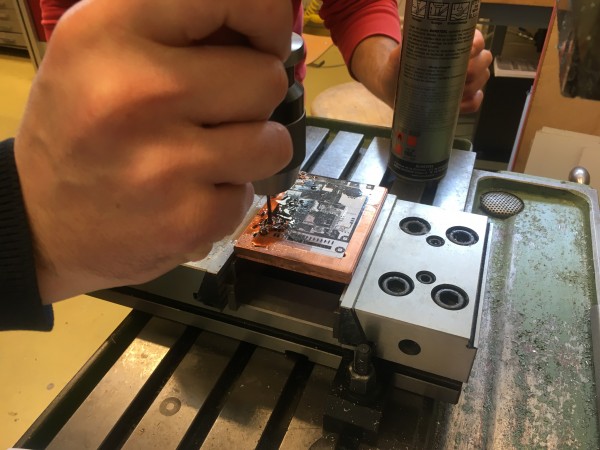 A final consideration is RF shielding, mostly due to co-use of the beacon site with commercial operators: Cross modulation from GSM/UMTS/LTE/5G carriers with the beacon transmitter could produce unwanted intermodulation products amplified by the PA to levels outside of regulatory compliance. Hence, an aluminum shield was designed. The shield uses two compartments, one for the RF portion, and one for the SMPSes, which can therefore be isolated from one another even better. After a prototype of the shield design was 3D-printed (for a fit-check), the custom shield was CNC milled by Severin DK1SEV. 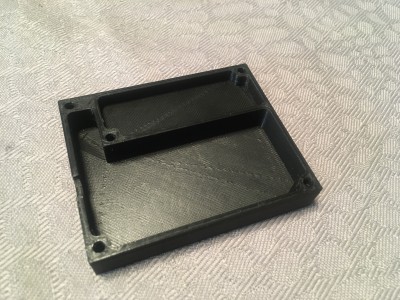 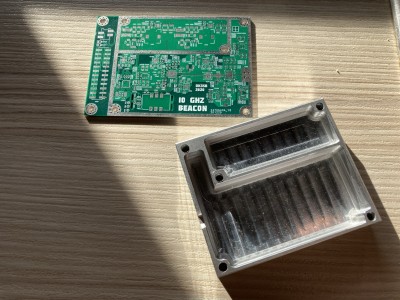 Two PCB revisions were fabricated. Revision 1 still used an on-board OCXO and can be operated completely standalone (without requiring an external reference clock). This was used as an opportunity to evaluate the tiny Connor-Winfield DOCAT series of OCXOs. A 50 MHz oscillator proved highly stable and fully suitable for example in a SSB transverter application. Warmup time was short, power consumption very reasonable - however in the end for a stationary beacon application GNSS was chosen as be the preferred solution.

The schematics and PCB design files (in KiCad format) can be found in the following repository: https://git.loetlabor-jena.de/10g_beacon/10g_beacon_hw

The serial (RS-422) interface is, during nominal operation, mostly used for time synchronization of the beacon transmitter and for telemetry monitoring (health of the electronics and environmental conditions).

The requirement of full remote operation necessitated some interesting features for the software: The TX can be disabled through software, or switched to a continuous unmodulated carrier for measurements by regulatory authorities. Even remote firmware updates are possible thanks to the built-in bootloader of the STM32G-series devices. The bootloader is started through a special command sent to the beacon, followed by the upload and verification of a new firmware. 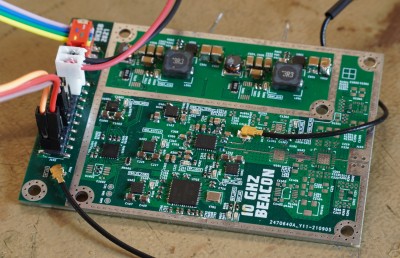 Before going into continuous operation at DB0HDF, the transmitter hard- and software were extensively tested on the lab workbench. The output power, phase noise and spurious performance was first evaluated, with a particular emphasis on varying input voltage conditions. Long supply wires could possibly cause regulator instabilities in final installations, and (resistive) voltage drop could across the cable could cause unexpected input voltage conditions.

A crucial discovery (made already on revision 1 of the PCB) was the presence of EMI issues due to the specific mode chosen for the input SMPS regulator. The LTC3624 supports both „burst“ and „pulse skipping“ modes in light-load conditions, with slightly different efficiency figures. The „burst“ mode resulted in large current spikes with high repetition rates around 100 kHz, which coupled into the sensitive VCO supply or tuning voltage of the LTC6948. These spurs were as big as -60 dBc @ fc=2.6 GHz and hence were unacceptable after up-conversion to 10 GHz (+12 dB). Use of the „pulse skipping“ mode successfully mitigated these spurs: firstly, their amplitude is significantly reduced (to a worst case of -86 dBc @ fc=2.6 GHz), and their frequency moved further out of band (to an offset frequency of 2.6 MHz), now being effectively visible at the switching frequency of the SMPS itself instead of the burst rate.

After this modification, a pretty reasonable phase noise performance was achieved (measurement taken on Rev 1 PCB, with in-band noise dominated by the on-board OCXO, not an external GNSSDO). 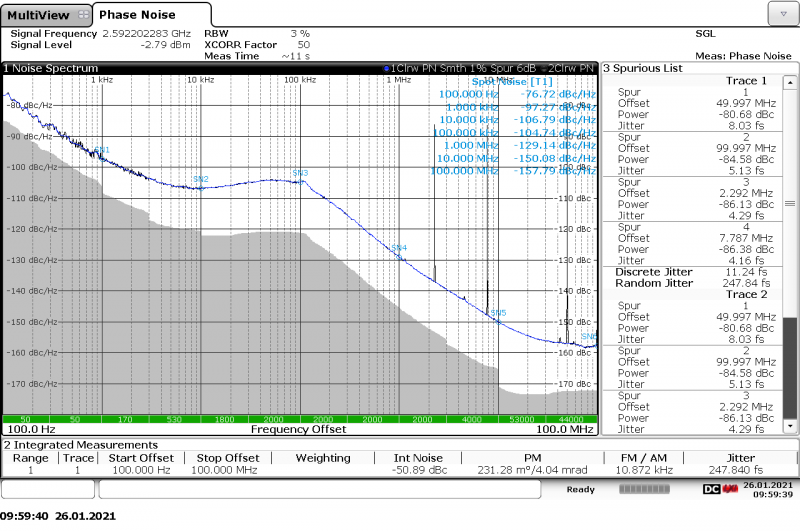 Various failure conditions were stimulated to make sure the monitoring logic was sound and successfully brought the transmitter to a safe state (TX+PA off) when issues were detected. I2C and SPI communication failures were tested.

Finally, a pre-integration environmental test was performed. The transmitter was installed in an environmental chamber and multiple ramps between -20°C and +55°C were exercised. The transmitter output power, power consumption, PCB temperature, etc were monitored during this time. Since the 'ground truth' power was measured externally together with the on-board detector voltage, the campaign could also be used for calibrating the power readout produced by the amplifier IC. 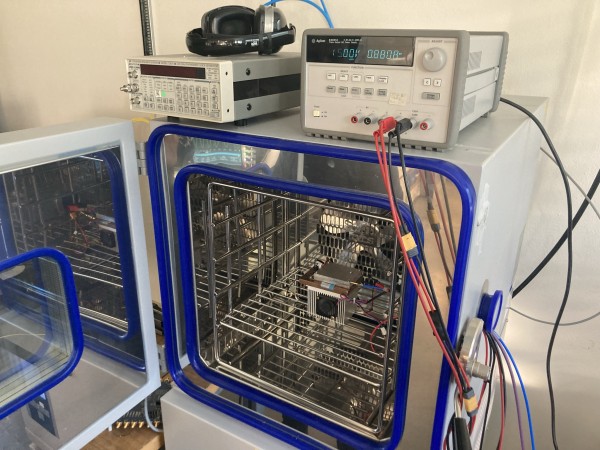 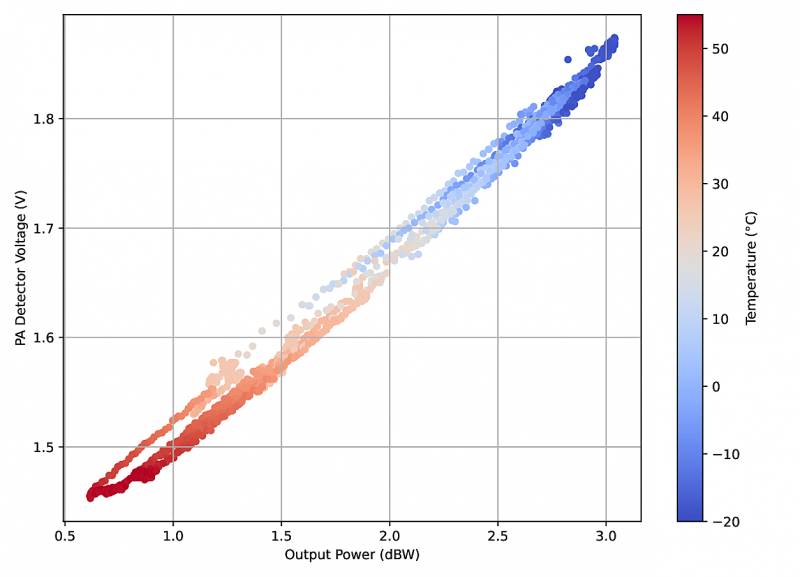 With the PCB battle-tested, the beacon needed to be assembled in a setup suitable for extended outdoor installation. A small add-on PCB allows supplying power and serial data through a common Cat.5 Ethernet cable with RJ-45 connectors. On the receiving end, a Raspberry Pi shield was designed that houses a relay for power control and RS-422 level conversion for the on-board serial port. 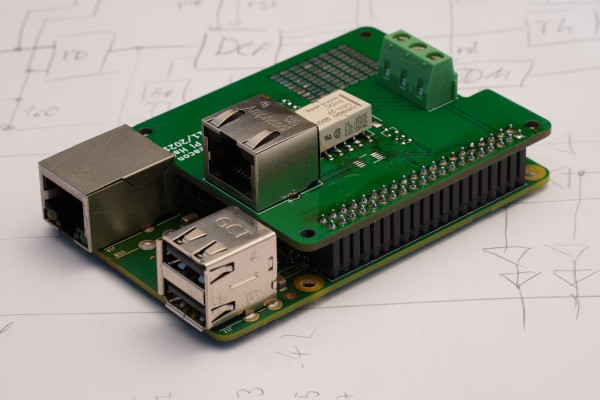 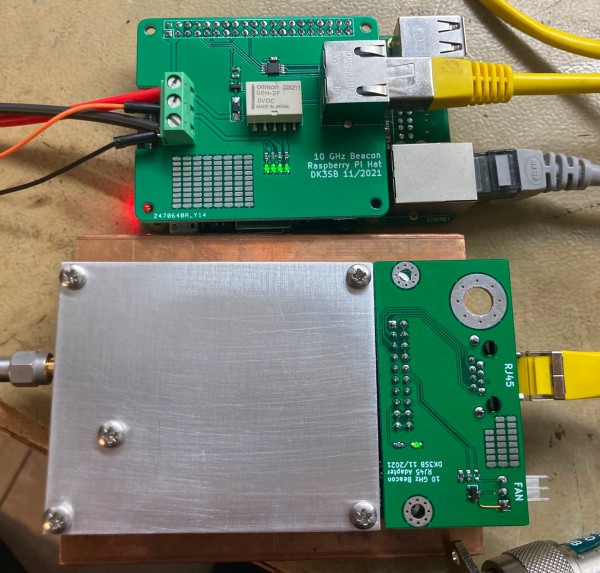 The transmitter and its slot antenna were finally mounted on a large heat sink and placed on a base plate. A 10 GHz circulator was added in-line to avoid damaging the TX in case the return loss of the antenna suddenly degrades due to e.g. temporary water intrusion. An outdoor GNSS antenna was mounted adjacent to the transmitter, to be used for the GNSSDO. The whole assembly is enclosed within a (commercial, surplus) fiberglass radome. 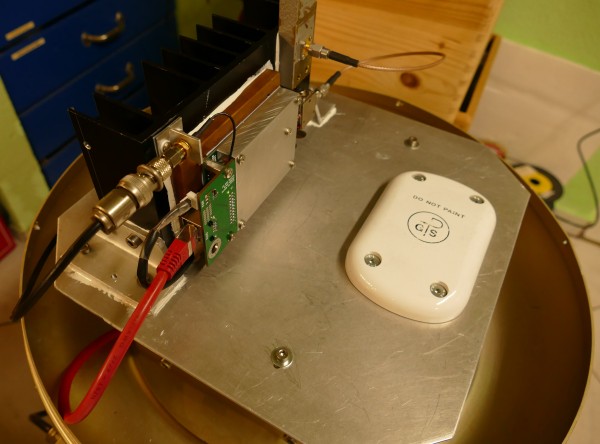 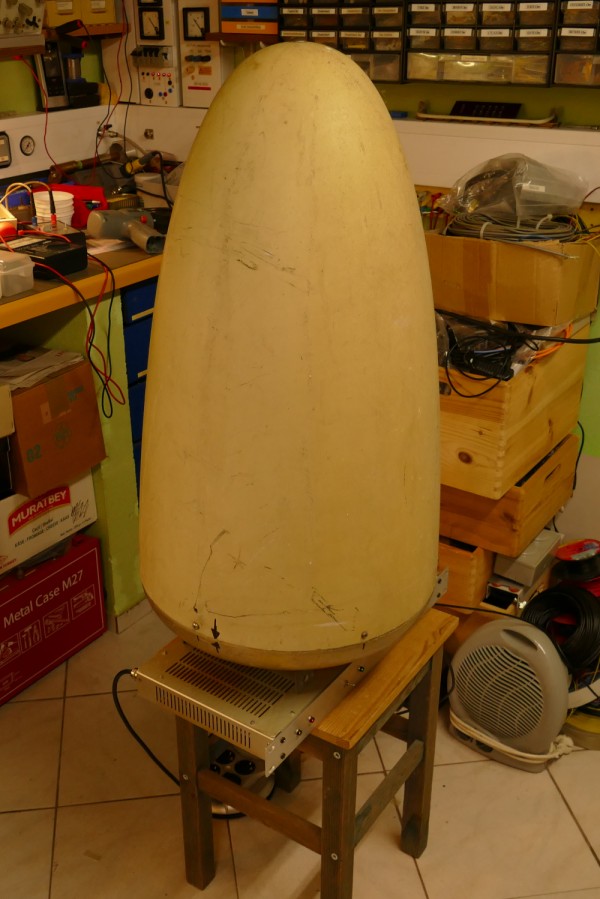 A corresponding indoor unit (19„ rack mount) was manufactured by Rolf DL2ARH. It houses a mains power supply, the Raspberry Pi plus RS-422/supply shield, and a Leo Bodnar GPSDO. The GPSDO is also monitored through its USB interface by the Raspberry Pi for loss of GNSS lock etc. 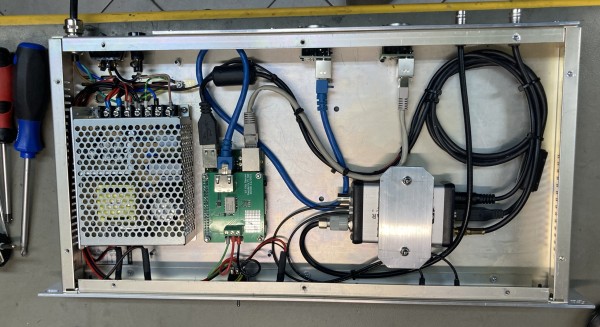 The hardware was transferred to DB0HDF by Stefan DK3SB and Rolf DL2ARH in January 2022. At first, the ODU was operated from inside the equipment room due to bad weather not permitting installation on the roof. The transmitter was mounted on the roof of DB0HDF in April 2022 (tnx Rolf DL2ARH es Ilona DG1ASK). 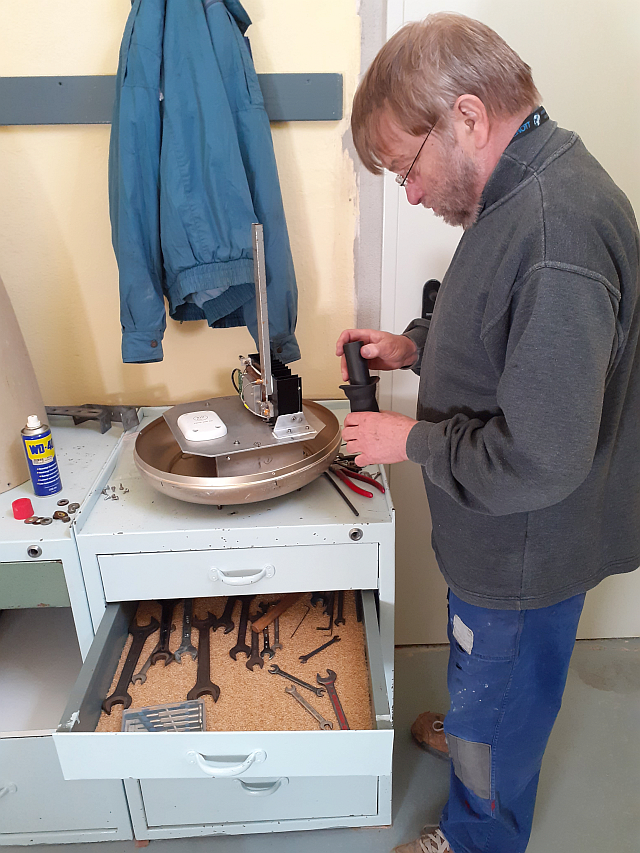 The beacon has since been operating without issues, being very realible in operation. A total of three PLL unlock events have been recorded over 8 months of operation, all of which the software automatically recovered from without manual intervention. Currents and voltages remained in the expected range and RF output power shows the expected temperature dependency. In the outdoor enclosure, PCB temperatures always remain at least 10 degrees above ambient air temperatures, however even in the very hot summer of 2022 never exceeded 50°C.